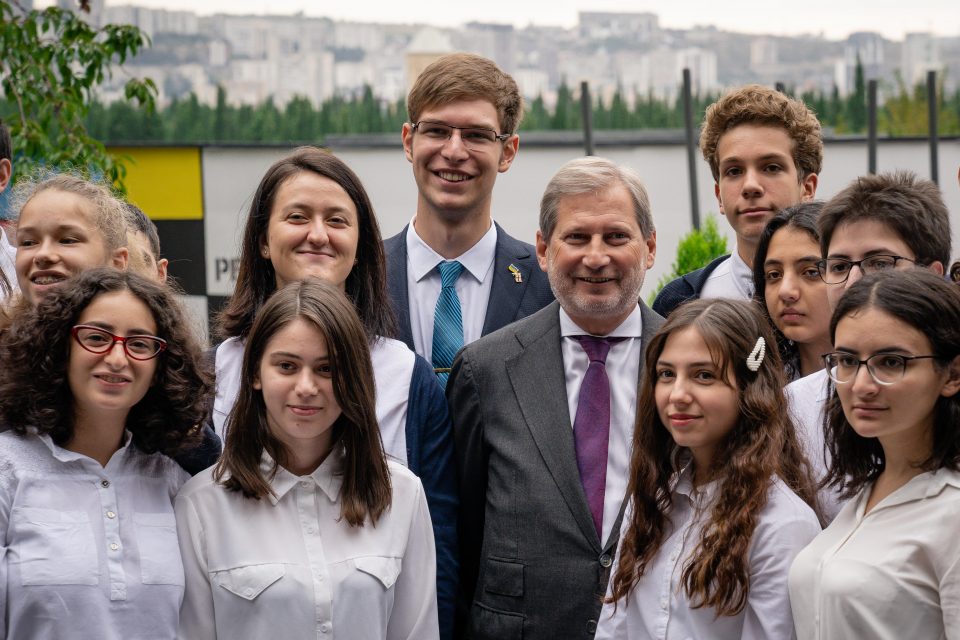 22 JUNE, TBILISI – The Eastern Partnership (EaP) European School programme proudly marks the graduation of its second cohort of students from the six EaP countries in a virtual ceremony hosted by New School – International School of Georgia. The students, their parents and the Faculty were joined by the Mr. Mikheil Chkhenkeli, Minister of Education and Science of Georgia, Mr. Lawrence Meredith, Director Neighbourhood East and Institution Building DG NEAR, and Ms. Grete Faremo, Under-Secretary-General and Executive Director of UNOPS, as well as other dignitaries, to celebrate the spirit of creativity and resilience of the School community to successfully complete the studies in the extraordinary and tough times of the global pandemic.

“My dear students, my most sincere congratulations to all of you! I believe that education received at the European Union Eastern Partnership School will lay a solid foundation to your future endeavors,” – said the Minister of Education and Science of Georgia Mikheil CHKHENKELI in his graduation remarks to the graduating class of 2021 as he has described studying in the time of global pandemic a challenging task, “but you did so well! You are smart and clever young people, full of determination, energy and curiosity and I wish you a life full of opportunities to achieve personal and professional success. Quality education is a major investment in life and I believe this investment will pave the way to remarkable accomplishments for you in the future.”

The Class of 2021 of the scholarship programme comprises 34 students from Armenia, Azerbaijan, Belarus, Georgia, the Republic of Moldova and Ukraine. All students, among them 24 girls, successfully graduated with the International Baccalaureate (IB) Diploma and will pursue their higher education studies in the universities of Europe, the United States and their home countries. Delightfully, 30 percent of the graduates have received full or partial scholarships from well-known universities globally and will join their peers in Spain, The Netherlands, Hungary, Italy, Belgium, Estonia, United Arab Emirates, Qatar, Turkey, United States and Canada.

“The success of today’s graduating class is also a lesson in resilience and determination. You “went digital”, and embraced the chance to learn from the difficulties you had to face. You showed dedication and enthusiasm. The New School has helped you grow personally and become more independent while shaping your own future,” – said Lawrence MEREDITH, Director Neighbourhood East and Institution Building, DG NEAR, in his commencement speech during the graduation ceremony.

Out of 34 graduates from Class 2021, five are from the Republic of Moldova, all from the capital Chisinau. Four females and one boy will proudly pursue their further academic studies mostly in the European universities, including in The Netherlands and Hungary, to study Applied and Computer Sciences, Law and Global Affairs.

“Having been immersed into a community of people coming from diverse cultural and societal backgrounds has allowed me to grasp a better understanding of multiple perspectives and its impact on our outlook on the world. Although I have a clear idea of what I would like to pursue as a major, I plan on expanding my area of interests in university in order to further develop as a well-rounded person,” – said a recent graduate Amina Rotari from Chișinău, the Republic of Moldova, who has received a full scholarship from the New York University Abu Dhabi and plans to major in Political Science with a minor either in Peace Studies or Social Research and Public Policy.

Since the launch of the scholarship programme in 2018, overall 105 students from different urban and rural cities of the six Eastern European countries have been awarded with the EU-funded full 2-year scholarship to study on the IB Diploma Programme. By 2021, the European School has a total of 64 students from two cohorts, 44 girls and 20 boys, graduated with the IB Diploma, pursuing the careers in a diversity of areas such as Economics, Biochemical Engineering, Physics, Social Sciences, Arts and Culture, Communications and Media, International Relations and Global Affairs, Medicine, Law, Liberal Arts and Computer Sciences. Another group of 40 students is set to join the programme for the 2021-2023 academic years after completing a very competitive recruitment process through applications, written tests and interviews.

Under-Secretary-General and Executive Director of UNOPS, Grete Faremo said: “Your success today is testimony to your hard work, resilience and resourcefulness. UNOPS is proud and honoured to have been a part of this journey, working together with European Union and other partners to offer high quality education opportunities in Europe’s Eastern Neighbourhood. Together, we can build a better future for all.”

The Eastern Partnership European School Project, a flagship Project and one of the “Eastern Partnership – 20 Deliverables for 2020”, is a wider initiative by the European Union (EU) for the six EaP countries – Armenia, Azerbaijan, Belarus, Georgia, the Republic of Moldova, and Ukraine – to address the needs of youth, focused on secondary education. The Project offers high quality education to successful high school students from six EaP countries through a competitive and merit-based scholarship IB Diploma programme with a focus on European Studies. The Project is expected to increase students’ educational and employment opportunities, fostering cooperation, multi-cultural understanding, tolerance, and fundamental values, and promoting a better understanding of the EU and its engagement in the region.

The project is funded by the European Union (EU) and implemented by UNOPS in partnership with New School – International School of Georgia, Ministry of Education and Science of Georgia and International Baccalaureate (IB) Organisation.

COVID-19 vaccination rate in Moldova at 15%

Moldova to receive 132,000 doses of vaccine against COVID-19 from Romania

A number of restrictions remain in force

Vaccination against COVID-19 with third dose starts in Romania

Doctors: If number of COVID-19 cases increases, quarantine will be introduced

Vaccination against COVID-19 with third dose starts in Romania